Every Thursday night is Late Night at The Wright! Stop by for an after-work or after-school visit until 7 PM.

The Friends of The Wright and Judge Craig Strong Celebrate the 102nd Birthday of Dr. Charles H. Wright: A Drive-Thru Event

How do I participate in the drive-thru?

Drive up to our Warren Circle entrance on Warren Avenue with your donation, where one of the Friends will receive you.

are there any special perks?

The first 600 cars to arrive will receive a free copy of our signature cookbook, Of the People: An African American Cooking Experience.

What if I can't make it to the drive-thru?

If you want to support The Wright, but can't do so in person, electronic giving is available. 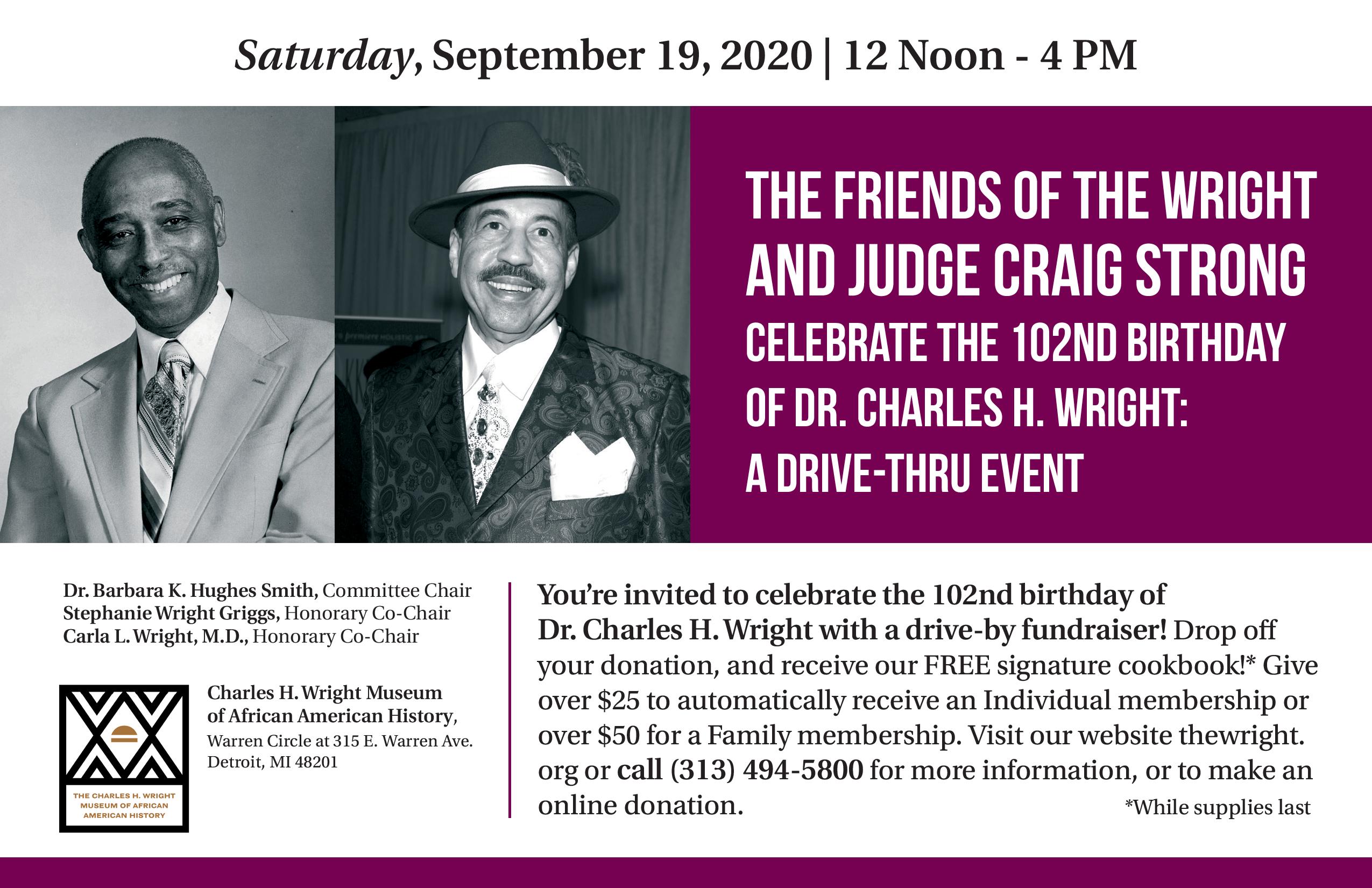 During his medical practice years, Dr. Wright successfully eliminated segregation at Detroit’s Woman’s Hospital now the Hutzel Hospital. This enabled Dr. Wright and other African American doctors to deliver the babies of their patients at this hospital. And during his practice years, he delivered over 7000 babies.

In addition to his Detroit activism, in 1965 he responded to the call from Dr. Martin Luther King Jr. to help in the war against hatred and bigotry. He went to Selma, Alabama and Bogalusa, Louisiana to provide medical services to injured victims of brutality.

Dr. Wright created the International Afro-American Museum in his doctor’s office in Detroit in 1965. Due to significant growth, the museum moved to a mobile unit in 1967. In 1987 additional growth required a move to a permanent building on Frederick Douglas St. and the museum was renamed the Museum of African American History. In 1997, Dr. Wright’s vision was realized with the opening of the Charles H. Wright Museum of African American History: a 120,000 square foot facility that counters negative stereotypes and inspires self-pride for African Americans.

Dr. Wright’s commitment to the Charles H. Wright Museum of African American History and other initiatives earned him the title of Father of the National Movement to Establish African American Museums.

His philanthropic work created the African Medical Education Fund; a scholarship program dedicated to training African students at medical schools in the United States and Canada.

Dr. Wright wrote several plays, including “Were You There?” a morality play on making the right choices in life. In addition, he wrote several books including, “Paul Robeson: Labor’s Forgotten Champion” and “The Peace Advocacy of Paul Robeson”.

As a husband and father, he was married to the late Louise Lovett Wright, a librarian. Their children are Carla L. Wright, M.D. and Stephanie J. Wright Griggs, FACHE and their granddaughter Louisa Wright Griggs, M.D., FACOG. In 1989, he married the late Roberta Greenidge Hughes Wright, J.D., Ph.D. Their children through marriage are Barbara K. Hughes Smith, Ph.D. and Wilbur B. Hughes III, J.D. Their six grandchildren, include Blythe Allen Mansfield, M.D., MPH, who with granddaughter Louisa Wright Griggs, M.D. continues the medical legacy left by Dr. Charles H. Wright.

The Friends Committee salutes Our Founder during his birthday month.

Judge Craig S. Strong, a highly respected and widely known jurist, received his high school diploma from Cass Technical High School, Bachelor of Arts from Howard University, and his Juris Doctorate from the Detroit College of Law, now Michigan State University School of Law.  He was appointed Referee in the Traffic and Ordinance Division of Recorder’s Court at age 31, and the following year was elected Judge in the Criminal Division of the Detroit Recorder’s Court.  Judge Strong currently serves in the Civil Division of the Wayne County Circuit Court.  Judge Strong has also served as President of the Association of Black Judges of Michigan, President of the Wolverine Bar Association, and National Chair of the National Bar Association’s Judicial Council representing Judges of color in the United States, Canada, and Caribbean Islands.  He is a retired Commander in the United States Navy Reserve, where he presided over court-martial proceeding as Judge in the Navy Marine Corps Trial Judiciary.

For years, Judge Strong has worked tirelessly to improve the lives of youth.  He is also the recipient of the Distinguished Man of the Year Humanitarian Award at the Care for Kids Celebrity Benefit hosted by the Hollywood & Vine Recovery Center.  When nineteen inner-city boys were recruited to form a scout unit, he singlehandedly raised over $1,000 and 125 uniforms in less than a week.  He was awarded the coveted Whitney Young Scouting Award.  Believing in the importance of appearance, he works with the Jackets for Jobs Program, helping to teach men to tie ties and dress appropriately for employment.  For more than three decades he has served as the Program Chair for the annual Adopt a Child for Christmas Program, providing warm clothing and toys for thousands of children under the age of twelve.

Judge Strong’s community leadership includes being a founding member of the Charles H. Wright Museum of African American History’s Annual African World Festival.  He chairs an annual membership drive during black history month that has garnered tens of thousands of memberships, which has played a key factor in keeping the doors open.  He traveled to South Africa as an official United Nations observer in that country’s first all-race election in which Nelson Mandela was elected President, monitoring voting stations in prisons and farmlands.  Judge Strong also participates in the National Bar Association’s Community Outreach Program, speaking at schools in Puerto Rico, the Virgin Islands, Barbados, Aruba, and South Africa, and in high schools throughout the United States, including Dorsey High School and the Marcus Garvey Academy in Los Angeles.
Judge Strong is a 33-degree Prince Hall Mason.  He holds lifetime memberships in the Alpha Phi Alpha Fraternity, the NAACP, the Charles H Wright Museum of African American History, the Navy Reserve Officer Association, and the National Bar Association.

Judge Strong is the recipient of numerous proclamations and awards, among them the State Bar of Michigan’s Distinguished Champion of Justice Award, the 2017 Soul & Spirit Humanitarian Award from Judge Damon Keith, the National Action Network’s 2020 MLK Day Justice of the People Award, and Honorary Citizenship of the City of Atlanta.  He has served as the official ambassador for the Steve Harvey Neighborhood Awards.

Judge Strong also has close ties to the entertainment industry, sitting on the advisory board of Detroit Metro Area Musicians and Entertainers Association.  He has also played a Judge on the television drama series Detroit 187, and the comedy series Detroiters, in addition making cameo appearances in the films such as Forbidden Fruit, The Church, Pawn Shop, and Chocolate City.